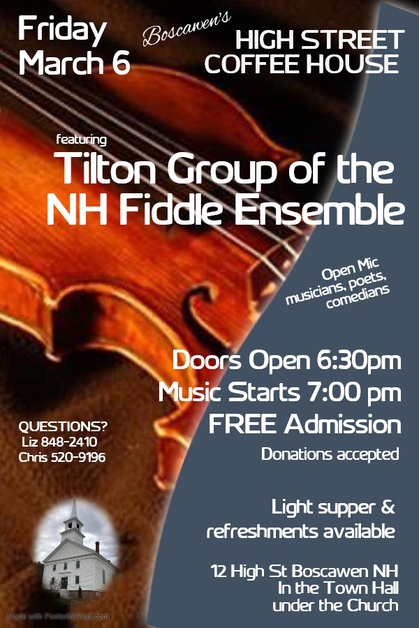 Mark your calendars now for Friday evening March 6th to see the Tilton Group of the NH Fiddle Ensemble. Doors open at 6:30pm and music starts at 7pm.  There will be a wide array of snacks and there is always the option to have a light supper before the band takes the stage or during the break. This evening is also open mic open to musicians, poets and comedians. Admission is FREE though donations will be accepted.

In August, Doug Hazard and the Sandwich Rangers took the High Street stage. A 4-piece acoustic music group, now several years old, with unique instrumentation and great original material.  Musicians included Doug Hazard, Lisa Ferguson, Jon Deveneau, and Dick Hodges. This band was the first to include a conga drum! They played a wide variety of songs, from Bob Marley to Leonard Cohen… but their Prime Focus was on the songs of their own two songwriters: Lisa Ferguson and Doug Hazard. 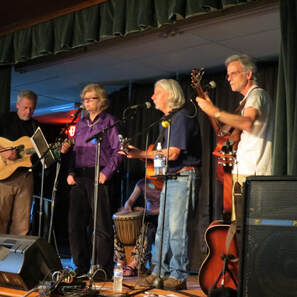 CARL BEVERLY joined us in June with his wife Carolyn and fellow musicians JackCarlton, Doug Farrell and Irena McQuarrie. Originally from Rhode Island, Carl moved to the flatlands of New Hampshire in the 70's, then north to the hills of Warner three years ago. The trend says Carl will be in Canada someday! His music style reflects the clean clarity of the acoustic guitar, and his songs also reflect that same clarity. Carl has been writing songs since the ‘70s, writing both instrumentals and lyrical songs. A mechanical engineer by profession, he spends his free time writing and as a frequent performer at area coffee houses, open mics and assisted living homes. Carl has a love of music and the outdoors and does much of his writing while hiking in the Mink hills alone or with his greyhound, Beau. Listen to a sampling of Carl's music at https://carlbeverly.bandcamp.com/track/an-ordinary-life. 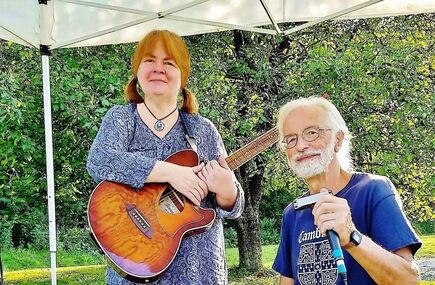 BONNIE WATERS AND HOWARD ROSCOE, otherwise known as "Meadowlark" joined the High Street Coffee house in May. Bonnie on guitar and vocals, and Howard on guitar and harmonica, play a combination of folk, pop, Celtic, and blues. From warm ballads to lively blues, these songs will inspire and lift you, as they mine the vast experience of being Spirit in human form.  Bonnie has been writing songs for many years, and her lilting lullaby, "Hushabye", won a prize in the John Lennon Songwriting contest in 2000. Howard ran sound for a music venue in Cambridge, England for many years, and has a soft spot for Mississippi Delta Blues. Bonnie and Howard have been working together since 2015, and also do some wonderful covers from the 60's to the present.  with New Consciousness themes. From reflective ballads and gritty blues to soaring inspirational tunes, her music includes them

DAN AND JENI KLARDIE - A New Hampshire based acoustic duo that strive to stir the soul with their music!  Passionate singer/songwriter, Jeni, blends harmoniously with husband Dan vocals and edgy guitar interpretations. Their sound is a fusion of Blues, Folk-Rock and Gospel. Their repertoire engages listeners with tight harmonies and often dramatic renditions of popular music as well as originals. Dan and Jeni have been performing at local Open Stages, Festivals, Coffee Houses, Special Celebrations and Private Parties for several decades. 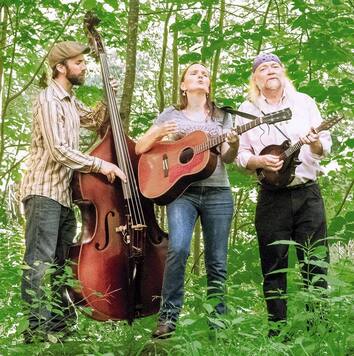 DECATUR CREEK - Doug Farrell, Steve Dionne, Beth Eldridge, and Jack Henry are each accomplished musicians, singer/songwriters, and performers who together are - Decatur Creek. Their diverse styles complement one another and the group's evolving original acoustic sound will bring a smile to your face, rhythm to your feet, and leave you wanting for more. Doug and Steve handle most lead vocals and guitar with forays on harmonica, percussion, and mandolin (Doug).  Jack handles the bass, most harmony vocals, some lead vocals, rhythm and lead guitar, dobro, electric lap steel, and high-string guitar. Beth shines on the fiddle and adds rhythm guitar along with her solid lead and harmony vocals. The band's influences run from traditional/roots to American, country, singer/songwriter, folk, blues, and rock - always with the focus on the songs, lyrics, and vocals. 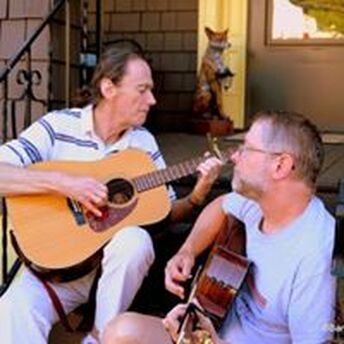 FORTUNES FAVOR - Mike Bradley and Chris O'Connor, the singer, songwriter folk duo Fortune's Favor, were the High Street Coffee House featured performers in December 2018. Previously known as The Bible Hill Boys, they are  best know for their song (I Do All My) Christmas Shopping at the Dump!